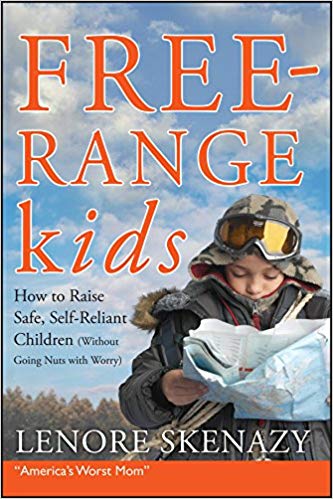 This book is serious fun.  Serious because no other book – and arguably no other personality – has done more to help loosen the lock-hold helicopter parenting has on our kids than Free Range Kids by Lenore Skenazy.

Fun because this book is hilarious. You might not expect that given the heated debates about parenting in this country, but this book is battling fear, and there’s no better way to do that than with laughter. It’s like the riddikulus charm against boggarts in Harry Potter.

In 2008, Skenazy let her 9-year-old ride the New York City subway by himself – and when she wrote about it, people went crazy. They called her extreme reckless, the world’s worst mom… And yet, when I lived in Germany every mom was like Skenazy. Children regularly take the Berlin “subways” –the U-bahn and S-Bahn– by themselves. They walk to school. They play by themselves. They buy things in stores. This is considered good parenting as it fosters self-reliance. Without Skenazy’s work, I would not have understood very well what I was experiencing in Germany. In fact,  when I first wrote about how Germans raise their kids, I compared it to ‘free range parenting.”

Skenazy continues to be a voice of reason, constantly speaking out to advocate for change and help diffuse the hype around helicoptering (including this recent post against the idea that “helicoptering works” that features a quote from yours truly).

She also helped found a nonprofit Let Grow to help like-minded people band together to create change. I highly recommend joining. To be able to experience independence, our kids need the support of their parents and an entire community – other parents, educators, neighbors and yes even politicians, so they can do simple things — like walk down the street, take a bus, or just experience a few moments of unsupervised play. Parents are still getting visits from the police or CPS for letting their kids do these things that German kids do every day.

That’s right, German kids are more free than American kids – I still think that fact should startle us into making some changes.

I am recommending some of the many books that influenced my own book Achtung Baby. See my previous recommendations for Free to Learn by Peter Gray and The Wave by Todd Strasser   More to come, so check back here.