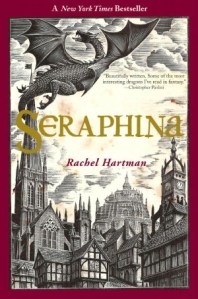 A part of me wanted to dislike this book. You see I also wrote a novel some time ago that features dragons that can turn into humans. (It’s called Spitfire, and I’m currently revising it.) I know it’s not a completely original concept, but we writers are a jealous lot. And Seraphina appeared on a lot of 2012 “best of” lists. (more reason for writer envy).

But I’m happy to report I overcame the green-eyed monster, and I really enjoyed Seraphina. I particularly admired the book’s richly imagined world (which thankfully is nothing like the world in Spitfire.) The plot was intriguing: the main character named Seraphina has a dangerous secret and there’s a murder to solve from the outset—a prince is killed in a dragon-like fashion, threatening the tenuous peace between dragons and humankind.

However, the novel’s strength is also its flaw: there’s so much to the fantasy world of Seraphina, you have to wade through a lot of details—and not all of it feels necessary to the plot. For instance, the whole made-up religion with assorted saints that were hard to keep track of. Details like this takes up a lot of space and slows down the pace a bit.

But I think most fantasy fans and dragon lovers will enjoy being in the world of Seraphina so much, they won’t mind spending extra time there. They may even like it enough to get the next one when it comes out.