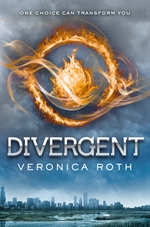 Beatrice lives in a dystopian Chicago where everybody is assigned to a faction, according to their dominant character trait. She is in “abnegation” which is a fancy word for selflessness. At 16-years-old, all the teenagers in this world must take a test and then choose a faction. Beatrice is, let’s say, a little divided. If I say any more, I’m going to spoil it.

So OK, I’m probably the last YA book blogger on the Internet to read this book. To be honest, I thought I wouldn’t like it. Everyone hailed Divergent as another Hunger Games, and I don’t like cheap copy cats. But after about 20 pages, Divergent had me by the throat and wouldn’t let go until I finished it. Beatrice is an awesome lead character, a totally bad ass, gutsy heroine. Her flaws tend to revolve on being too bold.

Somethings annoyed me such as a pretty unbelievable premise. Why in the world would everyone divide off by their main characteristics after a huge war? Also, the way Roth named the factions with all 50-cent words felt kind of false, but I’m sure a lot of teenagers will get the words erudite and amity right on their SATs this year.

Sure, Divergent is a little like the Hunger Games: both are dystopian, deal with war and have tough heroines, but most importantly, the two books are similar in that they have something to say. While Hunger Games is very much about war,

Divergent is about how we define ourselves and what we value above all else. What, if anything, is worth killing or dying for?

I’m curious to see where Roth takes the series in Insurgent. I hope she follows Suzanne Collins lead there too and makes the next book even better than the first.